Galway Racecourse is one of Ireland’s most iconic sporting venues, horse racing having first taken place there in 1869 and the current fixture list containing three clusters of meetings in July/August, September and also October with 12 separate fixtures.  The seven-day Galway Festival has grown to become one of the world’s most famous racing festivals with a total attendance of around 140,000 during the week. Many below-average but highly competitive races are included in the festival under both National Hunt and Flat rules but the meeting also includes Ireland’s most valuable National Hunt race, the Galway Hurdle. The betting markets at this festival are bigger than any other in Irish racing.

Galway racecourse is situated on the north-eastern edge of Galway itself and regular buses connect with Galway railway station which is less than 5km away. Those travelling by car will find the track conveniently located next to the N83 while a taxi from Galway town centre will set you back around €12 – €15. The closest international airport which is roughly 60km away.

This is a right-handed track which has a circumference of one and a quarter miles. The finish is preceded by a steep incline, however unless there is particularly testing ground the track is sharp in character. There is a relatively short finishing straight with a length of slightly more than a furlong. 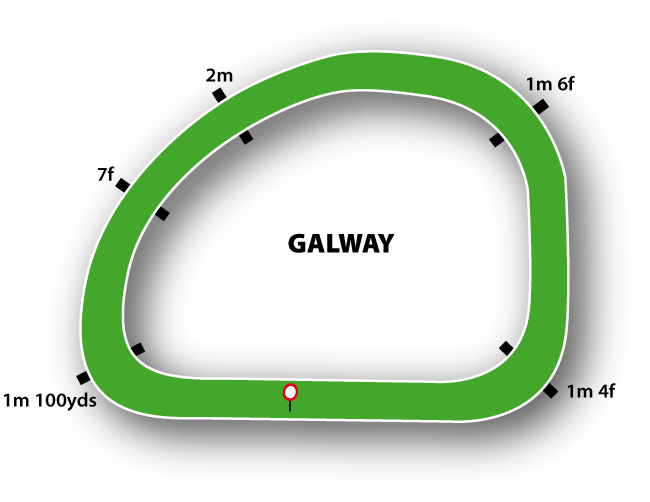 This is a ten-furlong long right-handed track with a relatively steep incline to the finish line, however it is sharp in character on the whole, the exception to this being when the ground is testing. The track favours handily-ridden horses and produces course specialists. There are seven fences on one circuit with the final two being close together, the run-in a length of over two furlongs. The hurdle course is positioned inside the chase course and is even sharper in character. 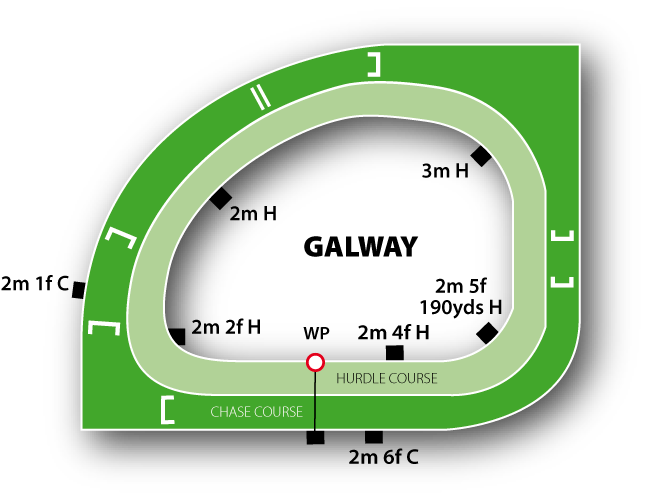 This is a tricky and testing track with constant turning throughout. It also has one of the stiffest finishes of any Irish course. With many big fields, luck in running can play a big part. Runners tend to race extremely tight due to the sharp turning nature of the course. For this reason, hold-up runners tend to run into problems given that those weakening at the front usually fall back straight into their laps. On seven furlong and one mile handicaps, a low draw can be an advantage. This is a unique track and it tends to produce course specialists.

This track produces course specialists and it isn’t a coincidence that the same horses return each year and do well. It is a hard track for jockeys, the final climb at Galway being one of the toughest in Ireland. The final two fences here are very close together but the tendency is to jump the second well if you manage the first with little effort. There are many more fallers at the penultimate fence than the final one, however the fences aren’t that tricky overall. As mentioned before, this track produces course specialists. It is also worth noting that some jockeys perform better here than at other tracks.

Looking at trainers, W P Mullins is the pick on the chase with 9 wins from 44. He also dominates the hurdles with 18 from 92, a strike rate of 19.57% over the past three years. Mullins is also the pick in Flat with 16 from 41. His dominance also extends to National Hunt Flat with 5 from 19.

With regard to jockeys over the past three years, Paul Townend has 7 wins from 23 rides on chase. Ruby Walsh has dominated over hurdles with 8 from 29. The Flat crown belongs to D O’Brien with 18 wins from 66 – a strike rate of 27.27%. National Hunt top prize goes to D O’Connor with 4 wins from 13 runs. 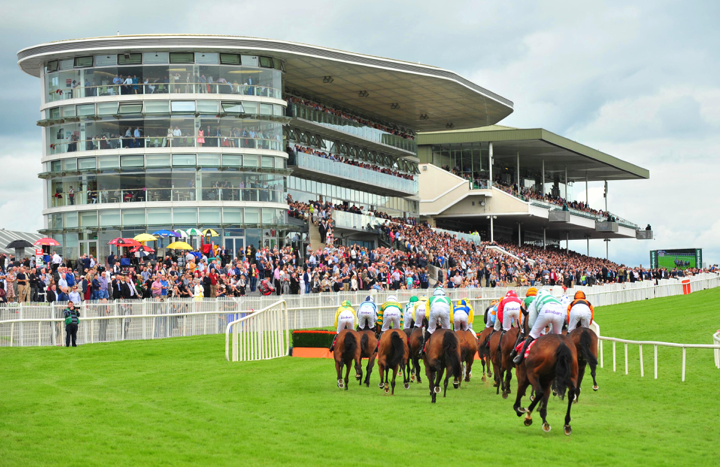