Cork Racecourse has hosted race meetings since 1924 and fixtures take place throughout the year under National Hunt and Flat rules. There are eighteen annual meetings which are very well attended.

This venue is located at Mallow, this being an appropriate location given that it is only a few miles away from the very first steeplechase which involved Cornelius O’Callaghan and Edmund Blake racing each other between the churches at Buttevant and Doneraile back in 1752.

This racecourse provides the punter with two Grade 3 Flat races, these being the Munster Oaks in June and the Give Thanks Stakes in August. There are six Graded races under the auspices of National Hunt, the most notable of these being the Grade 2 Hilly Way Chase in which winners have included Golden Silver (three occasions) and Beef Or Salmon (two occasions).

The ‘Cork’ in the title refers to the county rather than the city, this venue actually being situated close to the town of Mallow which lies some 35km north of the county town. Mallow itself is served by a direct railway from Cork and those who prefer to walk and take in some of the raceday atmosphere can reach the course in less than 15 minutes. Buses are few and far between, however Mallow is quite a busy station and taxis are usually available outside, a fare typically costing around €5 – €7.

The Flat track at Cork Racecourse is right handed and oval in shape with a twelve furlong outer circuit and a ten furlong inner circuit. This is generally a pretty fair track and a two furlong chute allows races of five and six furlongs to take place on a straight course.

The Chase Circuit is one and a half miles over a left-handed oval and there are two hurdle circuits, the inner one of these being approximately one and a quarter miles in length. The track is generally level and has a galloping character, no type of runner being favoured. A circuit of the chase course features eight obstacles with three fences in the home straight and the run-in is a length of one furlong. 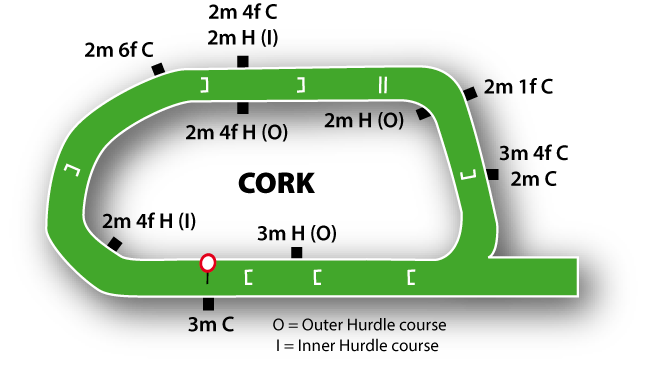 Cork Racecourse has a flat track which certainly suits pace runners. A low draw can be a big advantage from the mile and a half start as horses start close to the bend. On the whole, it isn’t easy to make up much ground on the round track with prominent horses being favoured. High numbers are better on the sprint when there is quicker ground, however the draw isn’t an issue when the going is soft as they can be competitive across all parts of the track. It can sometimes be a problem for a hold-up horse if drawn high as things can become compressed against the stands rail and it can be a problem getting a run.

This is a fair track that is galloping and given that it is so flat, it favours those that are prominently placed given that those in front don’t tend to come back as they do on some stiffer courses. The fences are generally ok although they can offer a few problems. The ground never really gets too deep and runners who don’t like things to be so testing can cope with it during the winter months. The track can sometimes get slightly flooded by the nearby river and as such the soil can be quite sandy, therefore it drains easily.

Over the past three years, top strike-rate (66.67%) goes to trainer E M O’Sullivan with four wins from six, however W P Mullins is the pick of the triumphs with eight from eighteen runners. Paul Townend stands out amongst the jockeys during this period with four wins from seven while M P Walsh also has four wins to his name from eleven outings.